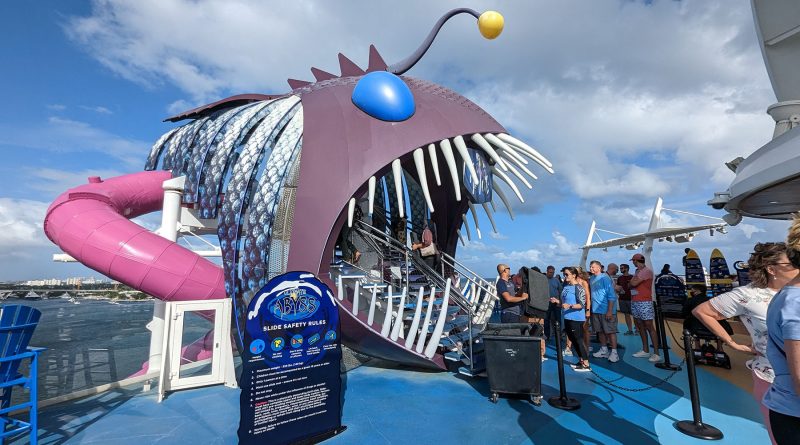 Are you looking for a little thrill on your next cruise? Check out Royal Caribbean’s Ultimate Abyss slide on their Oasis-class ships. You’ve probably seen the slide either in person or in pictures. It is hard to miss; 216 feet is twisting, fuchsia-colored tubes extending ten decks down the back of a ship.

Ultimate Abyss is often mistaken for a waterslide when people see it in the distance, but it’s really a dry thrill slide. That means guests can easily participate without having a bathing suit and a towel like a water slide.

Staring straight up from the bottom, Ultimate Abyss is an intimidating sight; twisting and sloping steel suspended 92 feet above you. Its purple hue has a menacing tone, and the spirals seem extreme.

Even entering the Ultimate Abyss itself can be intimidating. The entrance is through a large angler fish sculpture with large eyes and two-foot-long teeth. Once you get to the top of the stairs, you step foot onto a glass floor that overlooks the AquaTheater and the ocean way, way, way below you (150 feet). That’s the same height from the base to the torch of the Statue of Liberty!

The introduction of Ultimate Abyss

When it was launched, it was the tallest slide at sea, and years later, it still holds the record. But other ships have started adding massive thrill slides as well. MSC’s World Europa has since added a thrill slide that’s the “longest at sea,” and the Norwegian Prima’s The Drop slide has the highest g-forces at sea.

With the success of Ultimate Abyss on the Harmony, Royal Caribbean included it on every Oasis-class ship after it. They even retrofitted the original Oasis of the Seas with the Ultimate Abyss in 2019. The only Oasis-class ship that doesn’t have it now is the Allure of the Seas since it never received its multi-million dollar refurbishment (or “Amplification,” as Royal Caribbean calls it) due to the pandemic shutdown.

How do you ride the Ultimate Abyss thrill slide?

To ride Ultimate Abyss, you just walk up to the entrance on Deck 16. You don’t need any advanced reservations. It’s impossible to miss; look for the huge angler fish. The ride is typically open throughout the day. You can find the hours in your daily Cruise Compass or the Royal Caribbean app once onboard.

You get in the queue, and the attendant will tell you the rules and the best position to sit in as you approach the front. Then they’ll give you a black, carpet-like mat. Because it’s a dry slide, the mat is used to help reduce friction, similar to the potato sacks used on wavy slides found at state fairs.

The line moves pretty quickly. In my experience, it took about a minute for every two people in front of you (if both sides were running).

You start the ride by placing your mat on the slide entrance and sitting down. The front of the mat has a pouch that you put your feet into. In the past, you weren’t allowed to bring bags or loose items with you, but on my November 2022 sailing, I was allowed to put those possessions in the pouch.

Once settled in, you wait for the light above to turn green and for the attendant to tell you to go. And then you’re off…kind of. There’s almost no slope to this part of the slide, so you need to shimmy and hop far enough in for gravity to take over.

When you finally get to that spot, you start picking up speed. Keep your elbows in and sit as straight up as possible. Otherwise you’ll get friction burn on your skin (I made this mistake on my first ride and got a small, rug burn-like welt).

With a name like Ultimate Abyss, you’d expect the entire ride to be pitch black, but surprisingly it’s not. Instead, halfway through your journey, you’re blasted with a magical effect created with 300 different LED lights and sound effects.

Once you pass through that part, you complete two spirals at the bottom of the slide. The Ultimate Abyss lets you out at the end of the Boardwalk neighborhood. Then you step off and give the attendant your map. The whole ride takes about 13 seconds on average, according to Royal Caribbean.

Because there’s no water, attendants grease up the slide throughout the day. Your speed will vary depending on several factors, like the level of grease in the slide and humidity in the air (which can slow you down).

Overall, it’s a fun ride. While people who are afraid of enclosed spaces may be wary, it doesn’t feel too tight or confined.

You can see more about it in Royal Caribbean’s video below:

How much does a ride on ultimate Abyss cost?

Ultimate Abyss is included in the cruise fare, and there’s no extra cost to ride. You can ride as many times as you like.

What are the requirements to ride the Ultimate Abyss?

There are a few restrictions for guests who want to try this ride. Riders must be at least 44 inches (for those, like myself, who don’t know how tall children are, that’s typically a child between 6 and 8).

There’s also a weight limit. Riders must be less than 330 pounds (although, unlike some other cruise ship attractions, they didn’t require riders to step on a scale).

No wet clothing is allowed on the ride. On my last cruise, I had been on a waterslide about 30 minutes before, and the attendant said I was still too wet. The water would get onto the mat and then the slide, ruining the experience for others.

Children must be accompanied by a guest 16 years or older, but only one person can go in at a time, so you don’t have to ride with your child.

Which cruise ships have the Ultimate Abyss?

You can ride Ultimate Abyss on the following Royal Caribbean ships: 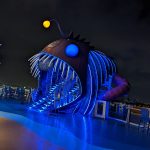 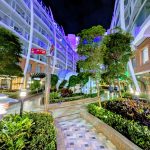 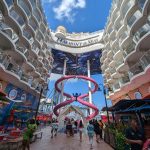 An In-Depth Look at Icon of the Seas