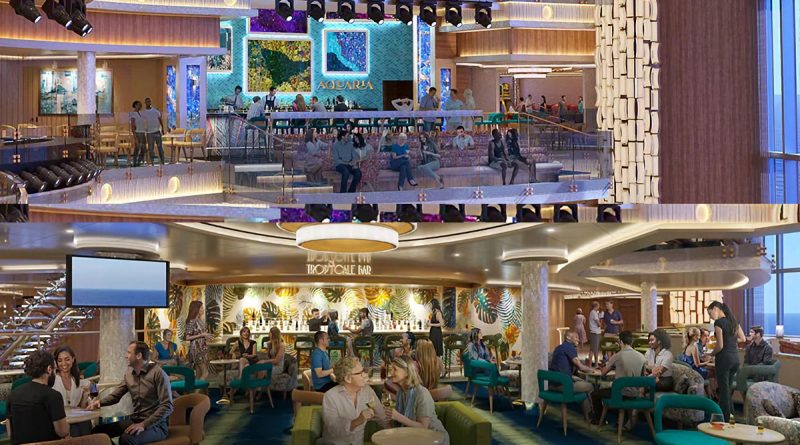 Back in August 2020, Carnival revealed the Carnival Celebration, a sister ship to the Mardi Gras. It’s named after the original Celebration, which sailed from 1987 to 2008. The Celebration will sail from Miami starting this November.

Initially, Carnival released some early details showing that Carnival Celebration will be widely similar to the Mardi Gras. It’ll have the BOLT Roller Coaster, the impressive Serenity adults-only area, a beautiful 3-story atrium with remarkable views of the ocean, and lots of restaurants to choose from. But there will be a few key changes.

For the most part, it sounds like Carnival Celebration will pay homage to Carnival ships of the past. While Carnival hasn’t officially released all the information yet, we can gather some things from their recent press release and updated deck plans.

On Mardi Gras, the Grand Central zone is the heart of the ship and spans three floors in the middle of the vessel. The cornerstone of this zone is the Center Stage area. This venue replaces the Atrium bar area found on most other Carnival ships. The 3-story glass windows offer impressive views during the day. Electronic screens come to life at night and transform it into a great performance space for comedy, music, and dancing. It’s a cross between a traditional Atrium and a theater. You’ll find Bonsai Sushi and Bonsai Teppanyaki, the casino, the Fun Shops, and Java Blue Cafe in this zone.

On Carnival Celebration, this zone is renamed “Celebration Central” and gets some cosmetic upgrades. The ceiling of Celebration Central will have a unique ceiling made of 1,4000 color-changing light fixtures that transform throughout the day. Together, they’re designed to resemble a burst of confetti.

This area will also feature two new bars, the Aquaria Bar and the Tropicale Bar. The Tropicale Bar replaces the Center Stage Bar on Mardi Gras. The name comes from the Carnival Tropicale, the first ship to sport Carnival’s iconic red funnel or “whale tail.”

The Aquaria Bar will replace the Grand View Bar. It’ll feature ocean-themed glass murals from the Carnival Victory, transforming it into a two-story decorative wall and giving the bar an aquarium-like feel.

The massive casino on this ship will be called the Empress Casino. The Empress comes from the Empress class of ship, which consisted of the original Mardi Gras and Carnivale.

Like Mardi Gras, it is expected to have both smoking and non-smoking sections. There has been speculation that Carnival will finally install glass dividers in this casino to help reduce smokiness, but that’s yet to be confirmed.

The Festivale Restaurant will be the two-story main dining room located at the back of decks 6 and 7. The original Festivale sailed from 1977 – 1997. If it’s like the Mardi Gras, this is the venue that will be used for set-time dining.

Mid-ship, you’ll find the Carnivale Dining Room. That replaces the Flamingo Restaurant found on Mardi Gras and will likely be for “Your Time Dining.” The Carnivale was Carnival’s second ship, a sister ship to the Mardi Gras, which sailed from 1975 – 1993.

Two new zones not yet confirmed but strongly hinted at

Excel-class ships like Mardi Gras and Celebration are split into six zones. These areas contain various shops, restaurants, bars, and venues that are themed to offer a cohesive experience. The zones help large ships like this feel less crowded and easier to navigate.

Carnival has indicated that two of the six zones on Mardi Gras will be rethemed. While their press release said the information would come later, the deck plans may have given us insights into their two names. On these deck plans, designers have replaced the older zones with new names that may or may not give them away.

On the Mardi Gras, the La Piazza zone spans the middle of deck 8. The Italian-themed zone is designed to look like a courtyard you would find in Italy. It pays homage to Carnival’s Italian roots (many Carnival captains hail from Italy, and many of the ships were originally built there). Red brick and iron streetlights accent the area, and murals of famous piazzas from Venice, Rome, and more adorn the walls. Guests in this zone will also find a Vespa scooter and Fiat car, favorites for photographs.

On the Celebration Deck Plans, this has been replaced with “820 Biscayne.” 820 Biscayne was the address of Carnival’s first corporate office back in 1976, so this zone makes sense with other parts of the ship paying homage to Carnival’s history. may be a reference to the Biscayne Bay located in Miami. It also makes sense since that’s the Celebration’s home port is Miami. Does that mean we’ll see a Miami-themed section? That means potential retheming of the Bar Della Rosa, and Piazza Panini (which is basically a rebranded Carnival Deli found on almost all other Carnival Ships).

“The French Quarter” becomes “The Gateway”

On a ship named Mardi Gras, a zone called “French Quarter” makes complete sense. In New Orleans, the French Quarter is the heart of most Mardi Gras events and activities. It’s located in the middle of deck 6, and unlike La Piazza, the main thoroughfare of the zone isn’t themed to resemble New Orleans directly. Instead, the beautiful two-story promenade is accented with color-changing LED colors and beautiful tilework.

On the Celebration, they needed a new name for this zone, and it appears that it is “The Gateway.” It’s not yet clear what The Gateway is and what it means for the theming of this section. Miami is referred to as the cruise and cargo gateway to the world, so it can be alluding to that. On Mardi Gras, this zone is home to the Brass Magnolia, Emeril’s Bistro 1396, and the popular Fortune Teller Bar, so they’ll likely to rethemed to fit in this zone.

More news about the Celebration will come

Carnival likes to keep things under wraps, and we’ll be getting more and more information as the ship’s launch date gets closer. With Mardi Gras, they were releasing new restaurants and venues up to the month before it sailed, so it’s safe to say we’re still in for some surprises on Celebration.