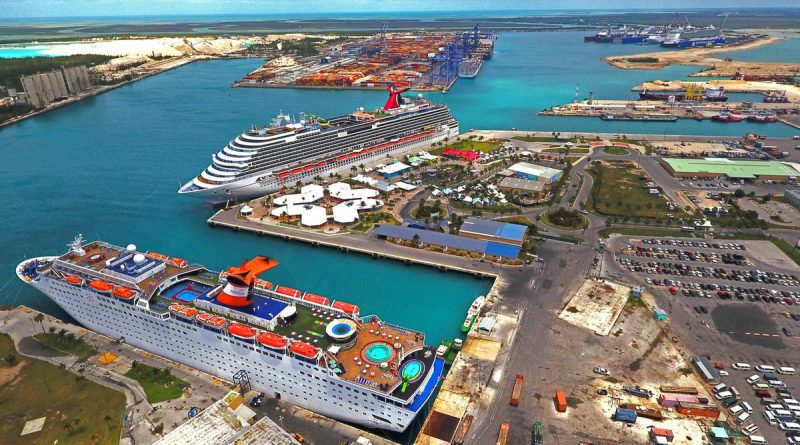 On the morning of Day 6, the Carnival Pride docked at the port of Freeport in the Bahamas. The sun shined brightly into the cabin, and the cool 72-degree air hit me as I stepped out onto the balcony. The ship sailed into port around 7 AM, so we were up getting ready for the day. The ship would leave at 1:30 PM, so it was a relatively short stay.

Compared to some other cruise ports, Freeport is very industrial. The ship docks in a big industrial plaza with little to do nearby. Immediately outside the ship and in the cruise port, you’ll find a few shops and restaurants (Senor Frogs and Fat Tuesdays), but besides that, you’ll have to take an excursion or taxi if you want to do something.

We decided to try the Brewery and Perfume Factory Tour offered through Carnival. It was $44.99 per person and included a tour of Freeport island, a stop at a Perfume Factory, a visit to Port Lucaya Market Place, and a tasting at a local brewery. It sounded like a relaxing, low-key way to see the island, so four of us signed up for the trip.

A benefit of booking excursions run through Carnival is that they usually have very good instructions and signage; today was no different. We just went down to the first deck, walked off the ship, and followed the signs to our tour group’s meeting place.

We boarded a comfortable and well air-conditioned motorcoach and met our bus driver, Tiny. As we made our way around the island, Tiny spouted off lots of facts about the Freeport and the Bahamas in general. He would point things out like the first KFC that opened on the island, the house of a wealthy doctor, the local hospital’s small stature, etc. It was informative and kept our attention the whole time.

Our first stop was “The Perfume Factory.” First off, the name “Factory” is a little misleading here; in reality, it’s housed in a moderate-sized pink building, a replica of a Bahamian Mansion to be exact. I always love seeing factories and production lines (I’m a sucker for the “How It’s Made” TV show), so I was hoping for something industrial scale. This facility was far from it. Most things were mixed in small batches in what used to be rooms of the house.

It seemed like the main thing they do is make fragrances and scents they sell basically to tourists from the cruise ships. Nothing was being made the day we visited, and although they talked a little bit about how it was made, it was mostly about smelling all the stuff and hoping you buy at the end. It was nice enough, but I wouldn’t take this excursion just for the perfume factory. I purchased some Bahama Mama spray for my dog to use between baths and still use it to this day.

The next stop was a visit to Port Lucaya Market Place. The Market Place is about 25 minutes from the cruise ship, and from there, you can easily get transportation to other areas of Freeport Island. It seems like a lot of the Carnival offered excursions made a stop here; we ran into several other people from the wedding party who were also there shopping.

The Market Place is fairly sizeable, 12-acres, and filled with tourist shops and restaurants. You could easily spend a few hours walking around here and taking it in. You had the usual alcohol, perfume, and jewelry shops as well as leather goods, pharmacies, and local crafts. The Market Place also had a few restaurants to visit. Tiny informed us that if we wanted to get Conch on the island, one of the restaurants was really good. It was only 10:30 AM, so there were very few crowds, and it wasn’t very alive or bustling yet.

Tasting at The Bahamian Brewery in Freeport

After an hour at the Market Place, we headed to “The Bahamian Brewery“. One of only 2 major breweries in the Bahamas, their signature line of beers is the Sands Beer, which most people see as the the official beer of the Bahamas. If you’ve been to a brewery before, it’s nothing earth-shattering. They walk you through how the beer is made, and get to tour the facilities. Unlike The Perfume Factory, this is a large scale facility with good production capabilities.

After the tour, the group went into the tasting room to sample the 6 beers they had on tap. They poured everyone a taste of one beer, and then we sampled as a group. If you like craft beers or beers with original character or flavor, you’re out of luck here, but they had a solid selection of regular beers that would be fine for most people. My personal favorite was the Sands Pink Radler, a nice light beer with fruity grapefruit notes that would be great on a hot tropical day.

After we made it through the 6 on top, our bus driver rang a bell, and we had 20 minutes to get a second or third…or fourth helping or any we wanted to try. They were not stingy at all with the pours. By the end, we had a serious buzz going on.

Lunch and Relaxation Back on the Pride

We made it back to the ship at 1 PM and headed up to the Carnival Deli for lunch. After all that beer, I needed some good, greasy food to soak it all up.

The Deli is located in the Lido Buffet (Mermaid’s Grill) but has its own hours. All the food is made to order there, so there can be a bit of a line, but the sandwiches are delicious and the line moves quickly. Over the course of the cruise, I tried several of the sandwiches, but my favorite sandwich had to be the Rueben.

This evening was the second elegant night of the cruise. There’s always less excitement on the second night; most guests were dressed down a bit more than the first one, and lines for the formal pictures were smaller. The suit I wore at the beginning of the trip was already starting to feel tight from all the food and drink I overindulged on over the last few days. Also, the food is less impressive the 2nd elegant night. The first one had lobster tail and steak; the 2nd night? Prime rib. Don’t get me wrong, it was delicious, but it just didn’t feel as fancy as the first. At dessert time, our waiter, Leonardo, brought out a little cake for the Bride and Groom, and we sang “Happy Honeymoon to you” to them. It was a cute little gesture that shows how much better the dining experience is when you have the same waiter every night.

After dinner, we went to the Casino for a bit. Again it so was smoky that it was hard to stay long in there. That evening was supposed to be a Rock and Glow Party in the Lido Pool area, but because of the rain, they relocated it to the Red Frog Pub. I haven’t mentioned this venue before, but we probably stopped in for a few minutes every night. It’s a really cool area with foosball, shuffleboard, and cornhole. At night, they’d have live music performing on stage. It was a great place to stop in, grab a drink for a few minutes, and then head someplace else. While the performers were good in general, it didn’t seem like people were camped out to see them for a whole set like you would see in some other areas of the ship.

For this evening, the lights were dimmed down low, and everyone received a glow in the dark necklaces and neon wands. People were dancing around as the band played the classic hit music. To close out the party, the whole crowd sang along to “Don’t Stop Believing.” With that, it switched back, and the regular musicians were back on stage.

This party illustrated the one downside of Carnival’s ADD planning. Nothing is more than 30 minutes, so you don’t get bored, but if you’re enjoying it, it’s weird when it just ends. It’s more noticeable on nights where you dress up. Nowadays, they have a white party and 80’s party on most of their ships. People bring outfits and dress up, some going all out, but the party only lasts for 30 minutes, which seems too brief for that amount of work. During the “Ask a Cruise Director” show on the last day, Rev. Dr. E said that research showed people wanted short activities and to be able to move on to the next event quickly. Personally, the brevity of events seems a bit too extreme to me, but who am I to argue with research.

After the party, we headed out to the Serenity Area for some fresh air. The Serenity Area is Carnival’s Adult’s Only Area on their ships. During the day, it’s a haven for people looking to get away from the loud kids splashing in the main pools and hot tubs. The area has premium-feeling padded loungers, clamshells and even some hammocks set up.

The Pride, along with the other Spirit-class Carnival ships, has one of the best Serenity Areas. It’s at the back of the ship, so you don’t get the high winds that you experience in the Serenity Areas on ships like the Horizon and Vista. The Pride’s area also has a full size pool AND hot tub, a rarity on Carnival ship’s Serenity Areas.

At night, they turned the lights down on the deck and the area became a soothing place to find some peace and quiet. All of the loungers and clamshells were still out and so we could relax under the stars in peace and quiet.

After that, we headed to the Lido Buffet for our traditional late-night pizza and snacks.