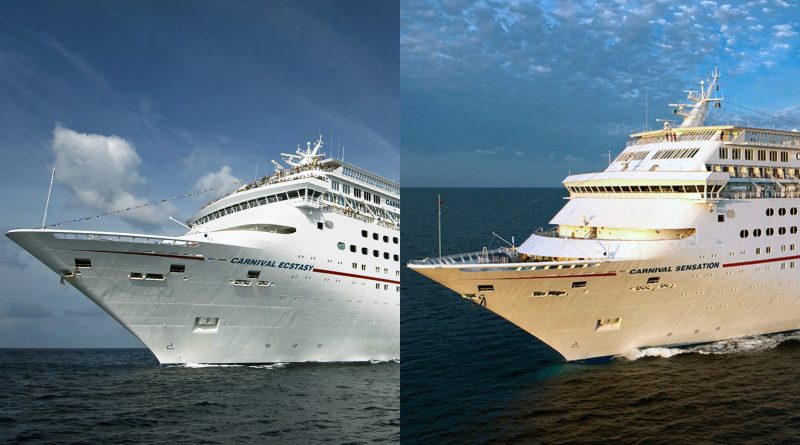 Carnival Cruise Lines announced that two ships will be leaving their fleet this year; the Carnival Ecstasy and Carnival Sensation. The Carnival Sensation was scheduled to resume operations from Mobile, Alabama, on March 5, but those sailings have been replaced with its sister ship, the Ecstasy. The Ecstasy will run those sailings until the October 10 sailing, after which it will be retired from service.

Why is Carnival making this change?

One of the primary motivators of this change is the uncertainty in Australia. For years, Carnival has kept two ships in Australia for sailings; the Carnival Splendor and Carnival Spirit. However, because of the Australian restrictions and regulations regarding the pandemic, Carnival has decided to cancel cruises there until at least Sept 2022. That means they had two extra ships they could redeploy in North America. The Spirit and the Splendor and both larger, newer, and more updated, so it makes sense to swap out the aging ships for these.

The Ecstacy and the Sensation are both Fantasy-class ships that debuted in the early ’90s. At one point, the Fantasy-class ship was the staple of Carnival cruise line and one of the most popular cruise ships in the world. With over 8 ships in this class, they introduced millions of passengers to the joy of cruising over thirty years.

But these ships were getting older and out of touch with modern times. So during the cruise industry shutdown in 2020, Carnival scrapped four of these ships; the Fantasy, Fascination, Inspiration, and Imagination. Now, they’ll get rid of two more, only leaving the Elation and Paradise in service.

While it’s sad anytime a ship leaves a fleet, in this case, it brings room for some fresh blood. The Fantasy-class ships are the smallest in the fleet, and while they have been updated over the years, they’re still lightyears behind the new ships.

Carnival has made plenty of changes and updates to the ships over the years. They’ve added Waterworks areas for kids, created the Adults-only Serenity Area in the rear of the ship, added a large pool-side screen for movies at night.

Unfortunately, there’s only so much that could be done based on the structure. Still, the ships were clearly not up to speed. The ships lacked many specialty restaurants found on newer ships. The liftboats were on the top decks, obscuring views and making it feel more closed in. Even with the multiple refurbishments over the years, the decor and spaces just felt dated and out of touch.

Why it’s a good thing for Jacksonville and Mobile

The Ecstacy and Sensation served the smaller ports of Jacksonville and Mobile. Since a majority of Carnival cruisers drive to their port of departure, that meant people near these ports had to settle for these older ships. With them out of the way, that means newer ships can leave from these ports and introduce new people to cruising. While there are currently no plans to bring some of the latest ships to these ports, ships like the Spirit and Spendor are much more modernized while still feeling quaint for people who like smaller ships.

Personally, it is sad to see the Sensation go. It was the second cruise I had ever been on and the first vacation I had planned for myself as an adult. I had an amazing time and got to introduce two friends to the joy of cruising. That being said, I have not been on it since then and have actively avoided Fantasy-class ships recently. I would also not recommend the ship to anyone because it was just so behind the times. I didn’t feel it’d offer the best cruise experience that you could currently expect.

What ships will replace the Sensation and Ecstasy?

The fleet isn’t necessarily getting smaller. We already know that Carnival will introduce the Carnival Celebration and Jubilee in the next two years. Those will be homeporting in Miami and Galveston, respectively, leaving ships that can be moved to other ports.

Carnival has also announced plans to acquire the Costa Magica from its sister company Costa Cruises. This ship will be undergoing significant renovation to transform it into a Carnival ship, including the addition of its signature red funnel, of course. It’s expected that this ship will be similar to the Carnival Sunrise and Carnival Radiance which are in the same class of ship (previously called “Destiny” and now called “Sunshine”).

All of these changes will likely lead to a further reshuffling of the Carnival fleet. While it’s safe to say Mardi Gras, Celebration, and Jubilee will not move because of their size and their use of LNG fuel which requires special equipment, the rest of the fleet can be shuffled to fill in holes and bring new ships to new people.