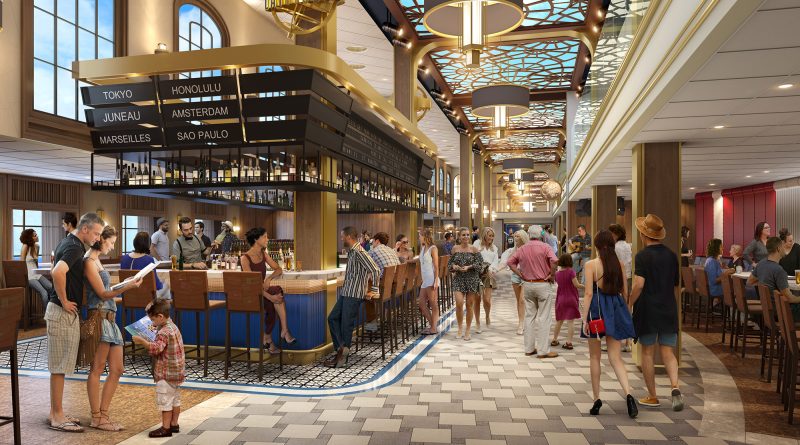 One way that the Celebration will be different from Mardi Gras is that two of the zones will be rethemed. Excel-class ships like Mardi Gras and Celebration are split into six zones. These areas contain various shops, restaurants, bars, and venues that are themed to offer a cohesive experience. The zones help large ships like this feel less crowded and easier to navigate.

“French Quarter” is replaced with the “The Gateway” on Carnival Celebration

On a ship named Mardi Gras, a zone called “French Quarter” makes complete sense. In New Orleans, the French Quarter is the heart of most Mardi Gras events and activities. On the ship, it’s located in the middle of deck 6, and unlike La Piazza, the main thoroughfare of the zone isn’t themed to resemble New Orleans directly. Instead, the beautiful two-story promenade is accented with color-changing LED colors and beautiful tilework. The venues in this area are themed very close to the traditional French Quarter, though. It’s home to the Brass Magnolia bar, Emerils Bistro 1396, and the popular Fortune Teller Bar.

On the Celebration, this zone is transformed into “The Gateway.” It’s a space that celebrates the love and excitement of travel around the world. This two-story promenade space is located on Decks 6 and 7 and has an entirely different look from its predecessor. The color-changing LED columns have been traded out for a more classic feel.

Carnival really upgraded this space in an attempt to create a fully immersive zone for guests. First, they added 12 high-definition video screens that serve as virtual windows, bringing in “natural” light and opening the space. They’re mounted above the promenade on the 2nd-floor wall and compliment a 100′ long LED ceiling. Combined, they can be used to show virtually anything. During the day, they’ll display the natural sea and sky, but at night they’ll be used to transport guests around the world.

Unique daily activities in The Gateway

The Gateway is more than just a fancy walkway or concourse; they’ve tried to make it an actual experience. The zone will change each night to reflect a new destination. Carnival gave an example of some theme nights such as “Abroad in Europe,” “Far East Voyages,” and “Mexico Lindo.” The windows and music will transform to reflect these destinations, and the food and cocktail options will also have selections to match.

When Carnival introduced the Fortune Teller Bar on Mardi Gras, they stepped up their game. The venue itself was one of Carnival’s best-themed bars, which deep red couches and fabric draped walls, and antique gold mirrors. The cocktail menu stood out just as much with 18 wild concoctions that smoke, swirl, and change color. The signature cocktails have been highlighted all over social media, so it was hoped that this bar would become a staple in the Carnival line, like their popular Alchemy Bar.

On the Carnival Celebration, this bar will be replaced with a bar named Latitudes Bar. Taking design inspiration from the old days of train and airport lounges, Latitudes has a classic, almost retro feel. The look harkens back to a time when travel was glamorous, not the cattle call airports are today. The bar stools are covered in passport stamps from around the world, and the menus are themed to be like atlases. Over the bar, a working flip display board, like the kinds that used to show train departures, will display messages and information to guests.

When designing Lattitudes, they changed the layout from the Fortune Teller Bar to make it more open and accessible. The original venue the main bar was on a wall in the corner, with seating across the deck area. Latitudes has a bar in the middle of the venue, offering more seating space at the bar itself and making use of the windows.

The drink menu at this bar will feature unique cocktails from around the world. Try a Singapore Sling or Tequila Sampler. Every night, the Lattitudes bar will feature a Celebration Happy Hour, an event hosted by the entertainment team which allows guests to celebrate milestones like birthdays and anniversaries.

Emeril’s Bistro is the only restaurant located in the French Quarter zone on Mardi Gras. It is an additional charge restaurant where you can order menu items a’ la cart for a quick bite. It specializes in creole food with options like barbecue shrimp, fried ship & oyster po-boy, and muffuletta.

On the Celebration, this restaurant becomes Emeril’s Bistro 1397. What does 1397 stand for? That’s actually the hull number assigned to the Celebration while being built in Finland. The menu at this restaurant will feature some favorites seen on Mardi Gras, like jambalaya and beignets, but also some new additions from around the world.

The menu isn’t the only thing being overhauled. Emeril’s Bistro 1397 has been restructured to make better use of space. More dedicated, restaurant-type seating has been added to make it feel more like an official restaurant and a place guests would want to stop to eat. They’ve also restructured parts of the restaurant. On Mardi Gras, the kitchen of Emeril’s is right in front of the windows, wasting a beautiful view. On Celebration, they’ve moved the kitchen and instead put tables by these windows.

Carnival already let us in on this transformation back in April at an event for travel agents.

On Mardi Gras, the Brass Magnolia Bar reflects all that is New Orleans. The bar’s custom cocktail menu has a New Orleans twist with drinks like Bayou Lemonade and NOLA iced tea. The space comes to life at night with a brass band playing lively music and keeping the energy pumping.

Brass Magnolia just has a different feel. Part of that comes from the high ceilings. Since ceilings on a cruise ship are relatively low, adding the second story open gives this space a different feel; much more open and grand. In fact, Brass Magnolia was Carnival’s first two-story dedicated bar.

On Celebration, the Brass Magnolia will be replaced with the Golden Jubilee. It’ll keep the same two-story open bar area, but the whole space will be dedicated to 50 years of cruising with Carnival.

You can read more about the Golden Jubilee Bar here.

Our Take on The Gateway

From the renders and promotional videos, the Gateway really looks like a unique space. The French Quarter is a very popular area on the Mardi Gras, so we’ve been interested to see how they’ll evolve that idea. Dedicating a section to global travel is an interesting concept, and it seems very well executed. This zone has more personality and cohesiveness than the previous French Quarter and seems like it’ll offer even more to do. Initially, I thought theming a bar after travel lounges, which in this day and age are one of the worst places on earth, was an odd choice, but it really is going for the old-school feel.