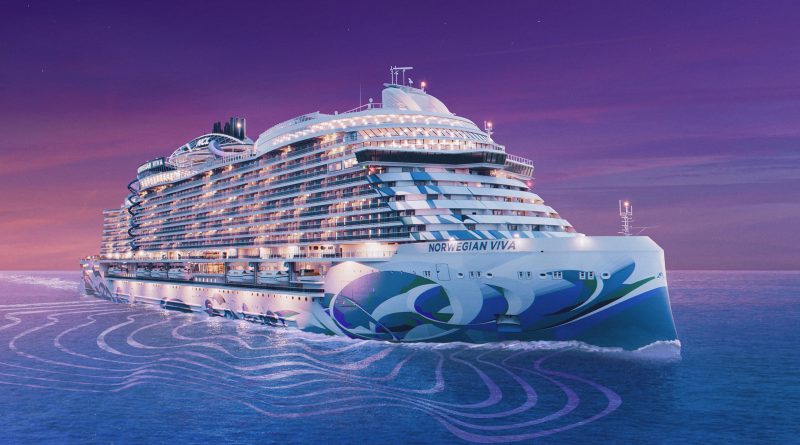 Norwegian Cruise Line has announced yet another ship to come to the fleet, the Norwegian Viva. The Viva is the second of six Prima-class ships that will eventually come to the cruise line.

Norwegian Viva is very similar to the Norwegian Prima

The Norwegian Viva is a Prima-class cruise ship and will be very similar to its sister ship, the yet to sail Norwegian Prima. It’ll accommodate 3,219 guests, based on double capacity. That’s 19% fewer people than Norwegian’s Breakaway-class ships. The ship is slightly smaller than the Norwegian Breakaway, but overall, it means that the ship will feel more spacious and open.

In terms of amenities and features, the Viva will have many of the same ones that will be found on the Prima. Norwegian didn’t need to reinvent the wheel here; the original Prima sailings had Norwegian record bookings, so they focused less on changing the ship and more on new itineraries.

Guests will have over 20 different dining venues to choose from aboard the Viva. It will include some returning favorites, like Onda by Scarpetta, and some new concepts. One of the most significant changes on the Viva from previous Norwegian ships is the lack of a traditional buffet. Instead, they have Indulge Food Hall, with 11 distinct concepts. This type of casual dining seems to be where the industry is heading, with ships like Virgin Voyage’s Scarlet Lady and Carnival Mardi Gras already implementing food stand-type venues.

The Norwegian Speedway has been a staple on their ships since the Norwegian Joy. Passengers can zoom around the race track at up to 40 miles per hour, racing each other in a timed test. The Viva Speedway will be 3-levels and 22% longer than the race track on the Encore.

On previous Norwegian ships, the Waterfront is the popular promenade area that wraps around the ship with dining and loungers available. On the Viva, it’s been transformed into Ocean Boulevard. It’s now bigger and has more attractions. Guests will find infinity pools, thrill slides, glass walkways suspended over the ocean, art gardens, and more. The whole area is designed to make guests feel connected with the ocean. It’s a significant departure from ships like Royal Caribbean’s Wonder of the Seas that have a much more “internal” focus and might feel more like a mall than a ship.

The Haven is an exclusive section of the ship with upgraded rooms and amenities. It’s a “ship within a ship” concept, where guests who want to spend more can have access to things like concierges, exclusive dining rooms, and lounges while still being on a ship with mass appeal.

On the Viva, the 107 suite Haven area will have a dedicated restaurant, lounge, and huge sun deck with an infinity pool. The whole back of the ship will be home to the Haven with a dedicated elevator moving guests through the space.

The big difference between the Prima and the Viva will be the itineraries. Norwegian has created some truly unique offerings for the Viva that will allow guests to travel to some less-visited ports.

The Viva will launch on June 15, 2023. During that summer, it will sail Northern European cruises from London to Reykjavik. It’ll also sail on some Mediterranean cruises from Lisbon to Rome and visit ports like Ibiza, Palma, Barcelona, Florence, Naples, Sicily, Dubrovnik, Venice, Santorini, Mykonos, Athens, and Istanbul.

Will the Norwegian Viva be a hit?

Since no one has yet stepped foot on a Prima-class ship, we don’t know for sure. The ship is mostly a carbon copy of the Norwegian Prima, but that’s not a bad thing at all. The renders look breathtaking, and the increased focus on outdoor spaces makes the ship seem like more of a luxury cruise line than a mainstream one. Of course, we’ll get a better idea once the Prima sails later this year, but so far, the Viva looks like a fantastic ship.  In the next few months, Norwegian will release more information about new restaurants and dining options specific for this ship.