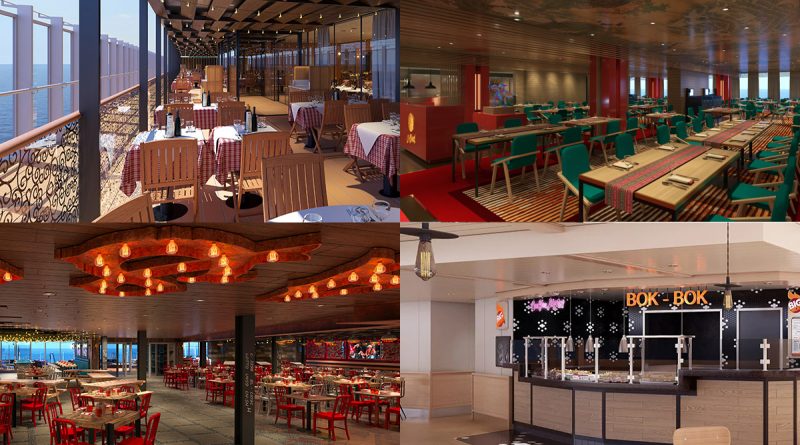 More than a year since its scheduled debut, the Carnival Mardi Gras enters service this month, and we’re learning more and more about it every day. The pictures and videos coming from the ship are stunning, and it really shows the next step in Carnival’s evolution of ship design.

One of the biggest surprises is the number of complimentary food venues included in the Mardi Gras, more than any other Carnival ship by far. When it was initially announced, Carnival already let us know about a bunch of new dining venues like Emeril’s Bistro 1396, Shaq’s Big Chicken, and Rudi’s Seagrill. Later on, they added a new restaurant called ChiBang to replace JiJi Asian Kitchen. So there were a lot of dining options, but quite a few had an additional charge. Now, we see that’s changing, at least for now.

Because these changes apply only to the Mardi Gras, it’s clear Carnival is worried about crowding at their venues. The Lido Marketplace / Buffet in the mornings or lunchtime is easily the busiest area on any Carnival ship. As a result, otherwise empty ships can feel like a sardine can during sea day breakfast and lunch. Carnival has already taken steps to improve this; rolling out breakfast burritos at Blue Iguana Cantina, testing breakfast burgers at Guy’s Burger joint on some ships, and offering an additional breakfast buffet in Ocean Plaza the Horizon, Panorama, and Vista.

For the Mardi Gras, it’s even more imperative they find a way to spread people out. The Mardi Gras has almost 30% more people than Carnival has ever carried on one ship before, but if you look at the deck plans, the buffet barely looks larger than its current biggest ship, the Panorama. The dining rooms also don’t appear to be significantly larger than previous ships (at this time, Carnival has not released dining venue capacities on the Mardi Gras). That means they’re either going to be packed, or they’re going to have to offer people alternative places to eat. On our March 2020 cruise on the Carnival Horizon, they were made Guy’s Pig & Anchor Smokehouse free for dinner. They explicitly stated that they were testing this change to see how they would affect the traffic in the dining rooms at dinner and how it might apply to Mardi Gras.

What is currently complimentary for breakfast on the Mardi Gras?

On many Carnival ships, you have two options in the morning; the Lido Buffet or the Main Dining Room. Technically, Blue Iguana serves breakfast burritos on most ships, but it’s right next to the Lido Buffet and suffers similar crowds, so we’ll count it as the Lido Buffet. On the Mardi Gras, you’ll now have 7 options to choose from.

As usual, you can get breakfast/brunch in one of the main dining rooms. Just show up, and they’ll seat you at a table. It’s rarely crowded. Give yourself some time though, it can be anywhere from 30 minutes to an hour to complete your meal.

Thankfully, they didn’t stick with the Italian theme from breakfast, as pasta with vodka sauce might be a bit heavy at 8 am. Instead, Cucina Del Capitano serves food like eggs benedict, omelets, french toast, pancakes, waffles, cereals, yogurts, fruits, and gritos (Italian-style grits). This venue will have waiter service, and you’ll have the option of eating indoors or outdoors.

Here you’ll find a full-service buffet that offers everything you can find at the Lido Buffet. You can choose to eat inside the restaurant or take it outside and find seating in the beautiful Summer Landing area.

As I mentioned before, the Blue Iguana Cantina serves breakfast on many of the Carnival ships. Here you can get a breakfast burrito made to order (not some pre-made wrap sitting under a heat lamp like other cruise lines).

A burger for breakfast? I don’t know if I could do it, but it’s an option on the Mardi Gras. The Plain Joe would probably be enough to last me all day, so I don’t know if I’d want to start with that. Guy’s burgers are my favorite burgers by far, so maybe this will win me over as well.

Unlike other ships, on the Mardi Gras, Guy’s Burger Joint is on a different deck than the Lido Buffet so you’ll have less lines here than other ships in the morning.

At Carnival’s newest casual venue, you’ll find chicken sandwiches and other breakfast offerings made the Shaq way. Grab a sandwich and sit outside and enjoy the morning, sea air. Even better, you can grab one of these breakfast sandwiches up until 3 PM!

Will your first stop in the morning be JavaBlue Cafe to get a premium coffee in the morning? While you’re there, you can grab a hot breakfast English Muffin sandwich. They’ll have a variety of options, including egg, sausage, cheese, tofu, turkey, and bacon. Java Blue doesn’t have much dedicated seating, but you can take your breakfast right over to Grand Central and enjoy the view out of the 3-story glass windows.

What is currently complimentary for lunch on the Mardi Gras?

For lunch, you’ll have the usual offerings that are free on most Carnival ships. That includes…

New additions for the Mardi Gras are

What is currently complimentary for dinner on the Mardi Gras?

Of course, the standards are complimentary for dinner. That includes the Main Dining Rooms, Lido Buffet, and Pizzeria del Capitano.

Traditionally, Guy’s Pig and Anchor Smokehouse, Cuccina del Capitano, and ChiBang! (which replaces JiJi Asian Kitchen), had an additional charge. On the first sailings of the Mardi Gras, these venues will be included as complimentary. They have not yet released for how long these will be free, but it probably comes down to how well they’re used and if they help avoid crowds in the dining room.

Is this the new direction for Carnival?

Only time will tell. In the past, most Carnival ships just had a buffet, two main dining rooms, and a steakhouse for dinner. Over the years, they’ve added additional fee dining venues like Bonsai Sushi and Cucina Del Capitano, but for the most part, the main meals were at the buffet and the main dining room. Now Carnival is going the way of offering many selections and letting passengers choose where to go in hopes of avoiding crowds and lines. The Excel-class ship is the future of Carnival, with two more ships coming in the next few years, so they need to get it right.

What will get confusing, though, is the cost differences on different ships. So you have to pay for Cucina del Capitano on some ships, and it’s included in others? It’ll be hard to validate that extra charge and confusing to guests.

What’s our take on the new Mardi Gras dining options?

It’s hard to say that this is a bad thing. The dining on the Mardi Gras is starting to look more like Norwegian’s free-style dining concept. For the first cruises, guests on the Mardi Gras have a lot of choices, and they could easily eat at a different venue each breakfast and evening and never pay a dime extra. I also love that a lot of these venues offer outdoor dining. I always hated eating brunch in the main dining room, where you’re just inside a big room and can’t even see the water. Being able to have breakfast with the sea air blowing around you is peak vacation to me.

That being said, these extra venues create a significant change from cruising styles of the past. For example, some cruisers love going to the same dining room every night and having the same waiter (I’m one of those people). I also used to love that you didn’t have to decide where to eat every night. You just show up and pick off the menu; it was like being on auto-pilot. Now, it’ll be more of a chore to make sure everyone is happy with the dining venue.