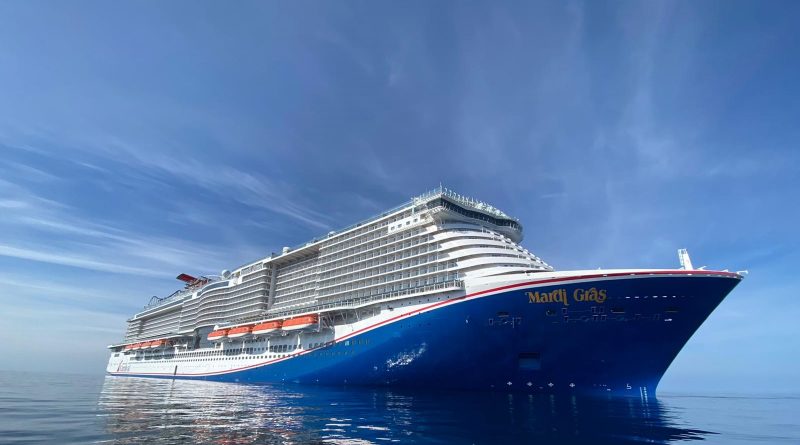 Today, Carnival Cruise Lines announced the first sailing of the Carnival Mardi Gras will be on July 31st, 2021. Unfortunately, it’s over a year later than the ship’s originally scheduled maiden voyage due to many setbacks. First, Carnival canceled the first 8 sailings of the ship due to shipyard issues. Then it was delayed even further due to the COVID shutdown. At least, Carnival received the ship from the Meyer Turku shipyard, the ship’s builders, on December 18th, 2020, but they’ve been waiting patiently for the green light since then.

Now we have a date, July 31st (hopefully). The maiden voyage launch date has already been postponed 4 times, but fingers crossed that fifth time is the charm.

Once it finally sets sail full of passengers, we’ll finally have these unanswered questions settled.

How will the new restaurants and bars be?

Over the years, Carnival has focused on several specialty restaurants and then put them on all of their ships. Fahrenheit 555, Guy’s Burger Joint, Bonsai Sushi are all well-known to a Carnival cruiser. It’s nice because it means that you know what to expect if you’re going on a Carnival ship. The Mardi Gras, though, sees the addition of many restaurants and bars that we’ve never heard of. Emeril’s Bistro 1396, Shaq’s Big Chicken, Rudi’s Seagrill, the Fortune Teller Bar. How is the food going to be? What about the new drinks? Can they compete with the Alchemy Bar offerings? Will it be worth paying extra for the for-free restaurants when the main dining room already offers a pretty good experience?

Is the Mardi Gras going to feel crowded?

Carnival’s newest ship holds 32% more people than its current biggest ship, the Carnival Panorama. There can be 5,282 passengers on board at double capacity and more if rooms have 3rd and 4th people. While the Mardi Gras is also 37% bigger than the Panorama, it’ll be interesting to see how Carnival’s space planning works.

The biggest ships at sea currently, the Oasis-class ships by Royal Caribbean, holds about the same number of people as the Mardi Gras, but are almost 20% bigger. That could present a problem.

When it debuted the Oasis-class ships, Royal Caribbean came up with the idea of neighborhoods to split people into different parts of the ship. That kept large crowds from being in any one area, making the ship feel less full. It worked well, and most passengers will say that it usually doesn’t feel like there are almost 6,000 people on board.

Carnival tried to duplicate this thought with their “zones.” The Mardi Gras has 6 different zones, which will hopefully split people up. For example, on most Carnival ships, the pizzeria and the deli are right in the main buffet and close by Blue Iguana Cantina and Guy’s Burgers. It makes it a madhouse at lunchtime. On the Mardi Gras, pizza and the deli (now called Piazza Panini) will be on deck 8, Guy’s Burger Joint on deck 17, Blue Iguana Cantina on deck 16 mid-ship by the pool. It should spread people out. There will also be 3 main pools in different locations and an adult Serenity area which should help split the crowds up some more, but it’s too early to tell.

How much will BOLT Roller Coaster cost? What will the wait times be?

The Mardi Gras will feature the first roller coaster at sea, the BOLT. Initially, they stated that this would be free, much like the SkyRide on the Carnival Vista, Carnival Horizon, and Carnival Panorama. Later, during the COVID shutdown, they quietly changed the text to say it is an additional fee, but no one has disclosed the cost or how it’ll work. It’s pretty disappointing, to be frank. Carnival doesn’t charge for the Ropes Courses or the SkyRide, and their lack of nickel and diming for ship activities is one of the things we like about this cruise line. Hopefully, it’s not more than $5, but we’ll see.

How smoky is the casino going to be? Will the smoke bleed into the new Grand Central?

Cruise ships casinos are always smoky. Between the small spaces, low ceilings, and windows that don’t open, they just don’t stand a chance against the onslaught of heavy smokers. If you’re not a smoker, it can be a big frustration point. While other cruise lines have worked to contain smoking areas behind glass partitions, so far, Carnival has left its casinos wide open. They’ll have a no-smoking section, but it’s just feet away from the smoking section, and in effect, useless.

This new ship design has the casino looking out on the Grand Central / Atrium area. Here’s hoping they thought it through and put up glass partitions or better ventilation to keep smoke from drifting up. There was a similar problem on the Carnival Vista where the smoke would sneak up to the upper decks near the Casino Bar, but thankfully they learned their lesson and put glass enclosures around that area on the Horizon and Panorama.

What will the private Havana area really look like?

Even since the launch of the Carnival Vista, Carnival has had a section of the ship set aside exclusively for guests staying in the Havana area. On the Vista-class ships, the Havana area is located on the back of the pool, with a beautiful pool overlooking the ship’s wake and two hot tubs. In addition, the area had plenty of comfy padded loungers and a conveniently located bar.

The plans on the Mardi Gras look much less than that. The area seems quite a bit smaller, and the beautiful pool overlooking the back of the ship is gone. Well, technically, it still exists; it’s been enlarged, called “Summers Landing,” and is now open to the whole ship. But the exclusive section seems to be downgraded.

As we said, the ship should be sailing this summer, so we’re hoping to have answers. Unfortunately, we couldn’t get on board any of the initial sailings, so if you do, tell us your thoughts! We’d love to hear your opinions. Share them in the comments or on Twitter.